This is another Christmas gift I gave that I wanted to share with you. A few months ago, my sister in law had seen my Family Home Evening board {that is nothing like this one} and said that she wanted one. Well, I had her name for Christmas, and had been trying to think of what I could give her. Then I remembered the conversation I’d had with her about wanting a FHE board, so I decided to make one for her. I didn’t have the stuff to make one with wood, but I thought I could come up with something with this magnet board that I had on hand. This was a simple project, it just took time {as any project does!}.

For the vinyl on the magnet board I used a light green, and I started by cutting out all the vinyl with my Lyrical Letters cartridge on my Cricut. In an effort to have as little vinyl waste as possible when cutting, I didn’t line the words up how I wanted them on the board, I just cut them out and then lined them up with each other. I used LOTS of scotch tape to get these straight, and then I had to figure out the spacing on the magnet board. But it all worked out in the end, and I am pleased with the result!

I used gray vinyl to cut the names and put them on chipboard lined cardstock with magnets on the back. Because they only have two kids so far, there are two tags without a name, so they can add others later if they’d like. 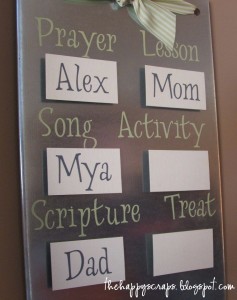 I was pretty excited about how this turned out, and I just might make myself one like this because the one I have I don’t have space to hang anywhere, but I have space for one this size! We’ll have to see!