Disclosure: I received product from Party Pail to use for this post/party. All opinions are 100% my own.

Birthday parties. I haven’t thrown one for a few years. My boys are lucky if they get a party every four years. After putting this Lego Birthday Party together, I’ve decided that I want to try and do more of them for my boys. They always enjoy their birthdays, we always make them a special day, but I know they would all enjoy having a birthday party more than once every few years.

In getting ready for this party, I pinned a lot of Lego party ideas on my Party Ideas Pinterest board. There are so many fun ideas out there for Lego Birthday Parties.

When planning the party, I decided to go with several colors from the Solid Color Party Supply selection from Party Pail. I planned to use bright colors, like the legos, so I went with blue, red, orange, yellow, and green. I decided to make a giant lego looking wall in my kitchen, so I covered the wall with two of the rectangle plastic table covers. Then I just eye-balled where to put the 10 1/4″ Paper Plates. 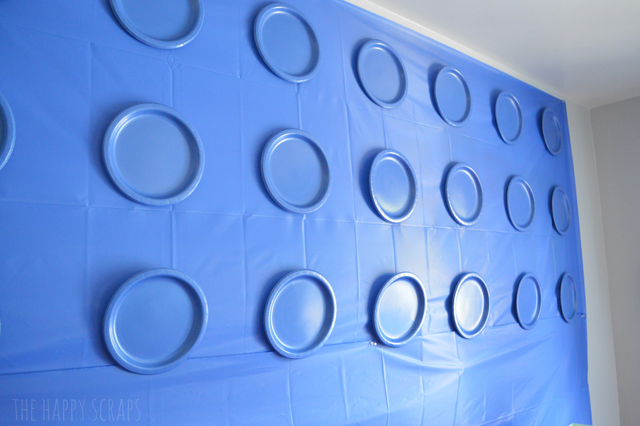 With the green beverage napkins, I used the Cuttle Bug and embossed them with polka dots. The embossing folder that I used was the closest thing I could find to looking like a lego. Here is a tutorial of how to do this yourself.

I made the utensil holder out of legos, the colors of the party and then put the orange forks and blue spoons in it. I thought it was such a fun idea that I spotted here.

What would a party be without confetti? I designed my own lego brick in Cricut Design Space and cut these out on the Cricut Explore. Rather than tossing all the little dots, I kept them and they just added to the confetti. I thought it was SO fun. It turned out way better than I had pictured it. 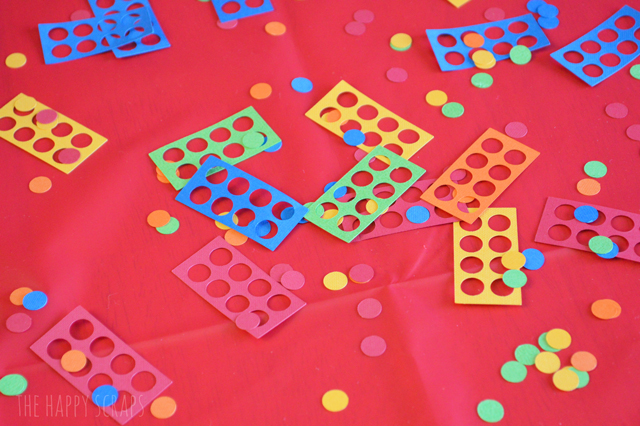 I’m starting to have quite the collection of Happy Birthday banners, but they are just so fun! I couldn’t not make one that matched the lego party. I used the Cricut Explore again to cut out all the banner pieces, and then just put it together. I used baker’s twine to tie each letter together. The paper straw garland is one that I made back in January, specifically for birthdays, but I never shared it. It matched this party perfectly! 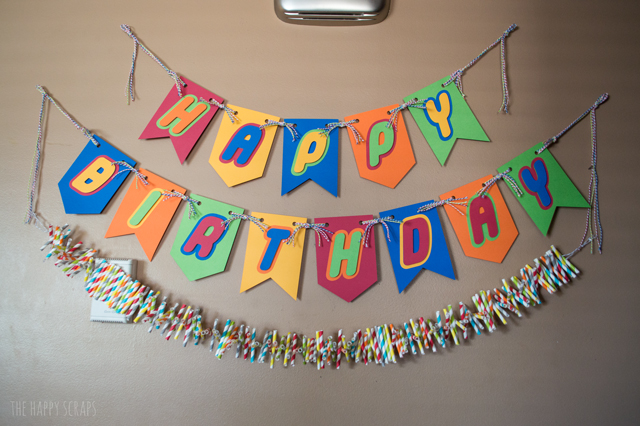 For the cake, I had to get a little bit creative. I knew that I wanted to make it look like a big lego, but I was having a hard time figuring out how to make the dots on the top. Then I was out shopping and a found a mini muffin tin, and I thought I could make those work for the dots, so I did. I cut the tops off of the muffins, so they were all the same height. I frosted the large rectangle first, and then put the muffins on, then frosted them. It was a little tricky, but it turned out alright. About two hours before the party, I told my husband about these cool candles I had seen, and so he got out all the legos and started digging out anything that would work. They were a fun addition to the cake, but they were really hard to keep balanced. We had to bury most of them at least waist deep to get them to stay. lol! 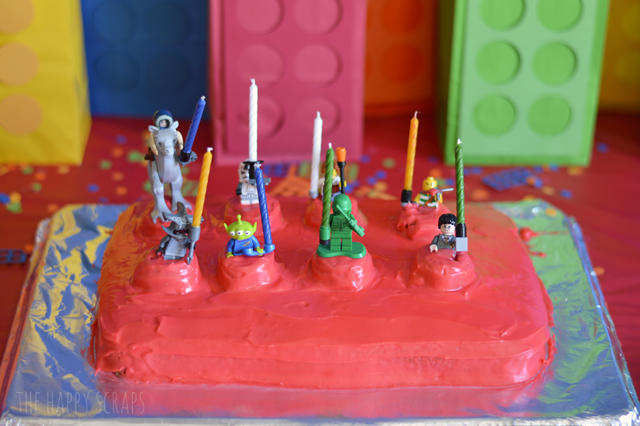 I was pretty excited with how the goodie bags turned out! I got bags that matched the party, and then using the Cricut Design Space, I enlarged the lego brick I had made and cut them to fit the bags. I didn’t want to waste the paper, so I used both, and I think it worked out well. We put a Lego Mixels set (mega blocks for the small kids), bubbles, noise makers, and lego mini figure chocolates (see below). The kids were pretty excited about it. 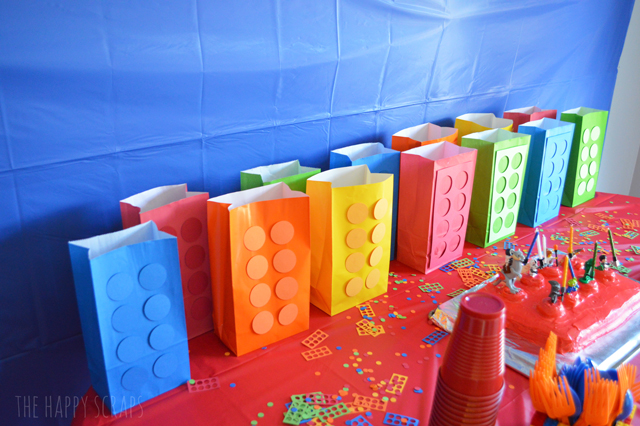 I remember a while back seeing these fun mini figures at Blooming Homestead. That is where I got the idea from to make colored ones, but I knew I wouldn’t have the patience to make them multicolored, so I just went with a few different solid colors. I wish I could have also found the lego brick mold, but I couldn’t find one, and I waited to long to purchase one from Amazon. 🙂 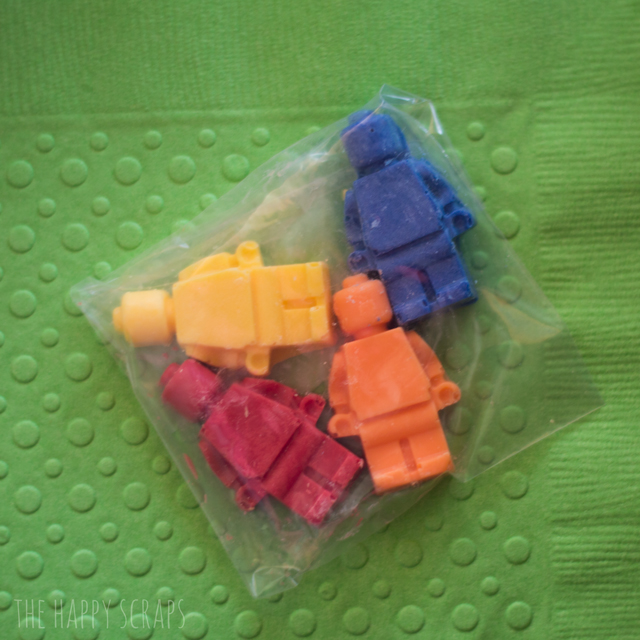 For the games, I was inspired by this post. We did the bean bag toss. I had fun making the bean bags for it, but not as much fun as the kids had playing the game. 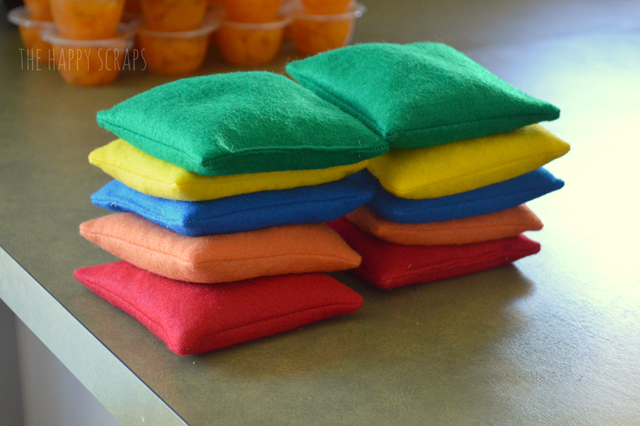 Here is the box that we used for the game. I had my husband cut the holes, and then we just spray painted it yellow. It took more than a whole can to paint that box, I couldn’t believe it. 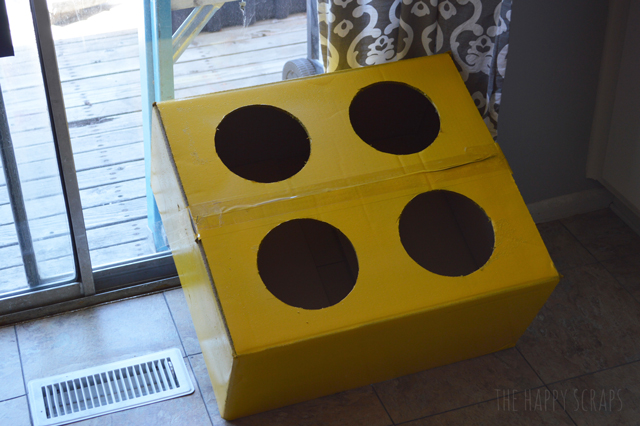 We played Pin the Dot on the Lego. The kids sure had fun with it! 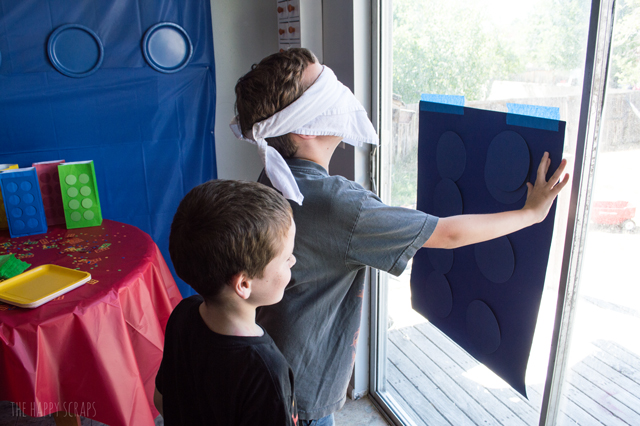 I had seen some similar cookies in blog land somewhere. They used different candies, and the frosting was the kind that dries on the cookie, but they kids sure had a fun time frosting their own cookies, and we topped them with the new mega m & m’s. They worked perfectly! We used the 7″ Square Paper Plates for the cookies. 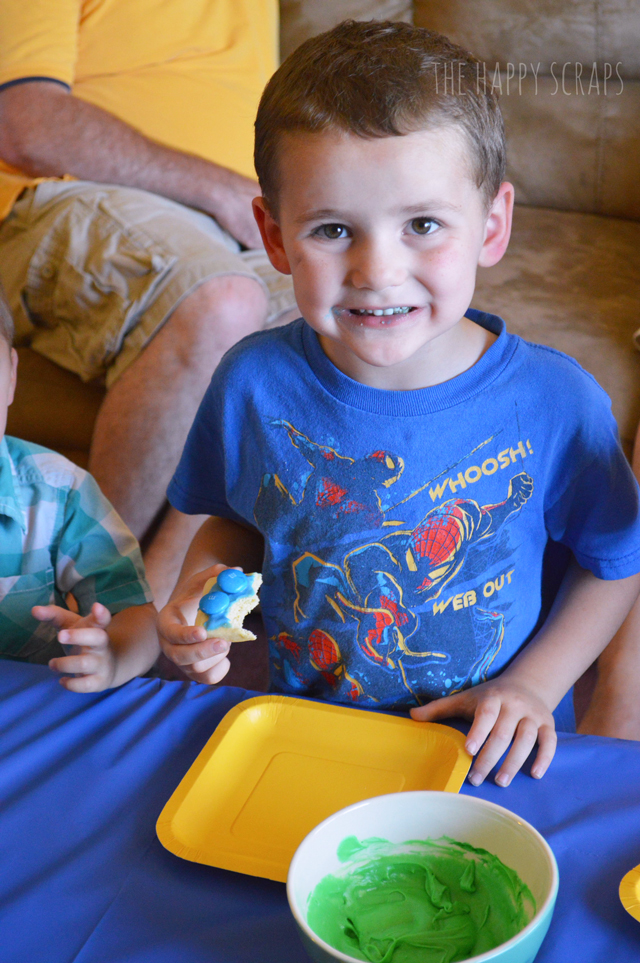 I even had bags to send them home in, but all the kids just ate them once they were done. 🙂 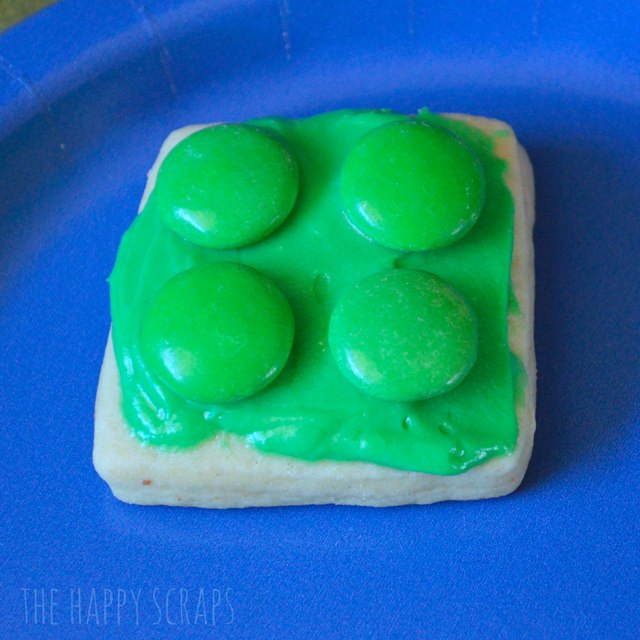 Once we were done with games, we had pizza. We used the 9″ Square Paper Plates for the pizza. If I would have planned ahead, I would have made home made pepperoni pizza, and made it to look like a lego as well. We had cups of fruit with it, and drinks were served in the 12 oz plastic cups. After we had pizza, we opened presents and had cake and ice cream.

The Lego Birthday party was a huge hit, and it was so fun to be able to use color coordinated plates, cups, utensils, and table clothes. If you are looking to put a party together, whether it is a birthday, baby shower, bridal shower, or any other get together, you really need to check out Party Pail! They have great prices, and their selection is awesome!

« The Fabulous Five – My Favorites
The Creative Exchange #11 »

The images and text on this site are copyright of The Happy Scraps. If you would like to feature a project or image on this site please email [email protected] Thank you! Please read the Privacy Policy and Disclosure here.
16520 shares