I’m over at A Little Tipsy today sharing a Mother’s Day gift idea.  Head on over and check it out.
As you know I hosted a baby shower for my sister a couple of weeks ago.  I posted a short recap about it, and told you that I would share each little piece with you.  Well, today I’m sharing this fun arrow sign. I think this arrow is my favorite out of all of them that I’ve made.
But first let me tell you about the challenge that it was to get to the shower.  My husbands car is broke down right now.  Luckily he is able to drive his dad’s truck to work, but I prefer not to drive that truck, unless I absolutely have to.  Well, since this shower was on a Saturday, and my husband had somewhere to be that day and needed my car, I was trying to figure out how I was going to get to my sister’s house for the shower.  I decided I would have my youngest sister come over on Friday and help with some of the preparations, and then I would ride with her on Saturday to get to the shower.  It was all going well, until we got loaded in the little truck and headed for the shower. (The shower started at 2, but I was planning to be there at noon to set up.  We didn’t leave my house until 12:30, so we were already running a little behind.)  We got on the freeway to head to my sister’s house and we were driving along and all of the sudden, the truck lost power, on the freeway.  Well, we were aware that this truck could do something like this, so we called our brother, and he told us what we could try to get it going.  I jumped out and wiggled some wires under the hood, and we got the truck going.  We made it where we needed to turn off a large highway, and the truck died again while we were at a red light.  I jumped out again, wiggled the wires again, and the truck started again, and right when the light turned green, it died again.  So we were going to have to push the truck.  I was not wearing the kind of shoes that would make pushing a vehicle easy!  We started pushing when the light was green again, and we made it half way thru the intersection before the light was red again (I’m sure it was quite the site to anyone that could see. We had the diaper cake sitting on the console while all this was going on).  Luckily, a couple of very nice men did come and help us out, about the time we were feeling like we could push no more.  They told us to just jump in and they would push.  They were angels.  We never did get the truck started again.  We weren’t too far from my sister’s house at that point, so we called and her husband came and picked us up.  We made it there by about 1:30, and still had to decorate, but it all came together just fine! 🙂
Anyway, here is the sign. 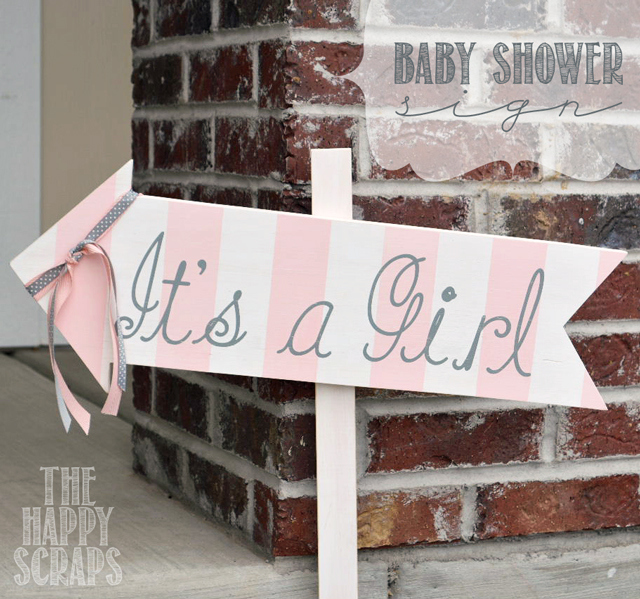 I started by painting the arrow white.  Then I used some painters tape and measured and marked where I wanted the stripes. 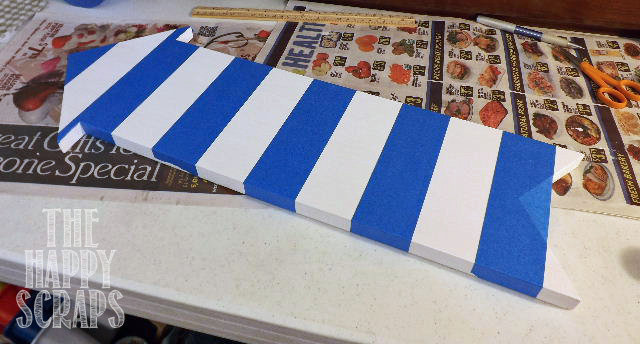 I painted the stripes a light pink.  Once it was painted I pulled the tape off. 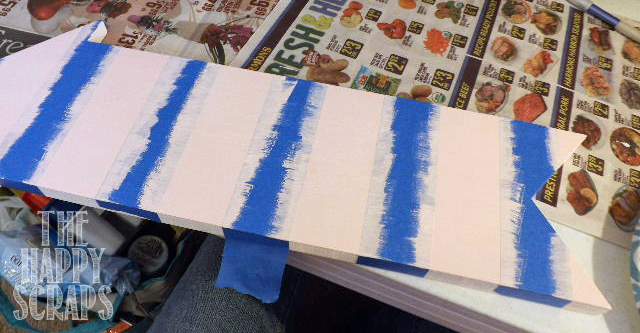 Using my Cricut and the Extreme Fonts cartridge, I cut out “It’s a Girl” with vinyl and used it as a stencil, just like I did on my Fall and Spring Arrows. 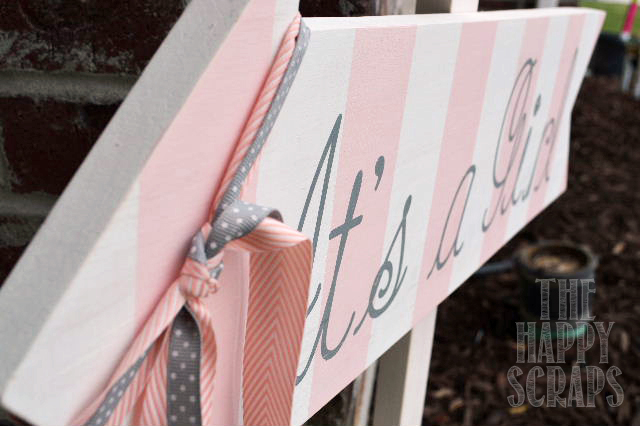 Once I had the arrow all painted, I slightly distressed it with some fine sandpaper, and then I added the ribbon. Seeing this sign just makes me happy, I love it that much!

« SNAP! A Creative Bloggers Conference
How to Take Napkins from Drab to Fab »

The images and text on this site are copyright of The Happy Scraps. If you would like to feature a project or image on this site please email [email protected] Thank you! Please read the Privacy Policy and Disclosure here.
1 shares