A few weeks ago my third son turned 10. I haven’t always been one to throw birthday parties for my kids. They cost a lot, give me anxiety, and before we lived in our current home, I felt like we didn’t have the space to actually throw parties. I did throw a Star Wars party for my oldest when he turned 4, my second had small family get together type parties when he turned 3 and 4, I threw a Buzz Lightyear party for my third when he turned 4, and a Lego Birthday Party for him when he turned 8. I don’t think I’ve ever thrown a party for my fourth boy, we’ve always just done things with family. In a perfect world and if I was a perfect mother, I’d have thrown parties for each of them when they turned 4, 8, and 12. Well, since we’ve moved, I decided that I need to do more parties for my boys. SO, I planned this Shark Themed Birthday Party for my 10-year-old this year. He was SO excited about it!

The first thing I did was create the invite. It included our address and phone number so people knew where they were going, but I took those off so I could post this. 😉 I looked on Pinterest to get ideas for what I wanted to create, and this is what I came up with. I just printed them at home on my Laser Color Printer. (I love this printer and am so glad I bought it! Plus, the toner lasts forever! I’ve had it for a year and a half, and I’ve only had to replace the black toner once. I still haven’t replaced any of the colors.) 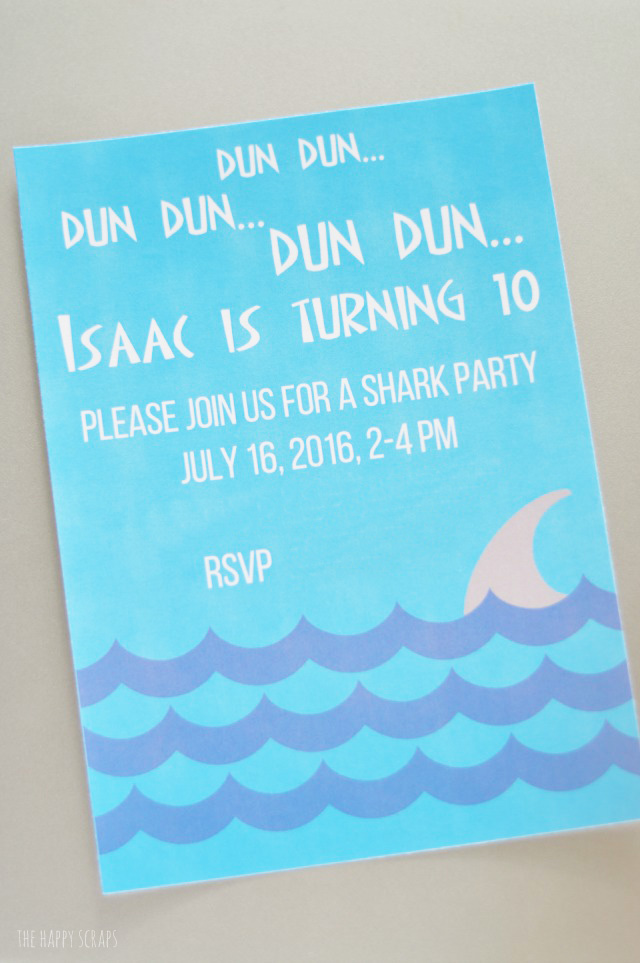 I created this “welcome” sign to welcome guests to the party. I used a piece of foam core board and spray painted it yellow. Then I cut black vinyl using my Cricut Explore and put it on the sign. 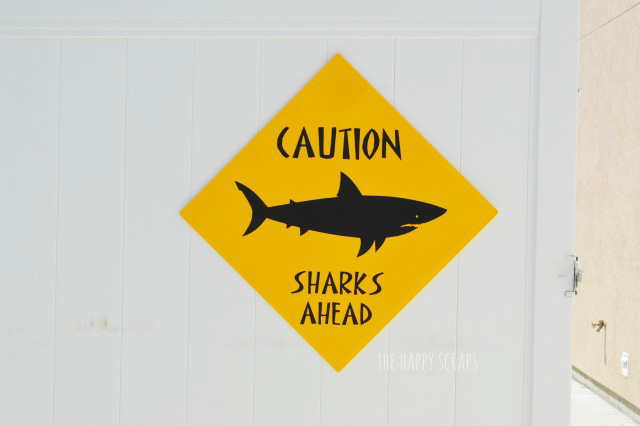 I had seen an idea similar to this over at The Craft Patch, and decided to do something similar. I picked up some cheap plastic table covers (or you could use a roll of table cover), and then used painters tape to attach it to the vinyl fence. I cut out shark fins with my Cricut Explore, and put them in the waves. The waves looked cute before the shark fins were there, but the shark fins made it that much cuter!

This is the table I set up to hold the cupcakes, goodie bags, and drinks. I got most of the stuff on it, and then was trying to get a few pictures, kids were showing up, etc. and my husband says, “ummm, the cupcakes are melting.” So we took those back in the house until it was time to eat them. I guess that’s what happens when you throw an outdoor birthday party in the middle of July! It was nearly 100º that day, so I’m not sure what I expected, lol! For the cupcake toppers, I just cut some shark fins with my Cricut Explore and put them on some paper straws. I frosted the cupcakes with blue frosting and then put the shark fins in. On the goodie bags, I just attached a shark fin to blue bags as well. 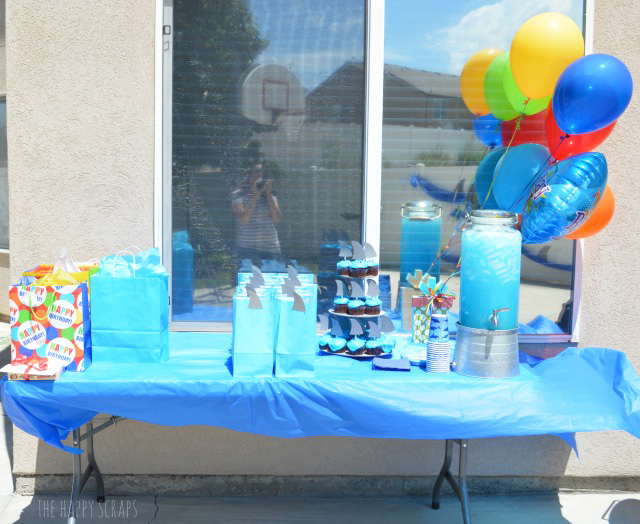 For the party, we had a few different activities for the kids. We started out by having all the kids use sidewalk chalk and draw a shark picture on the cement so we could walk in shark infested waters for the party. 🙂 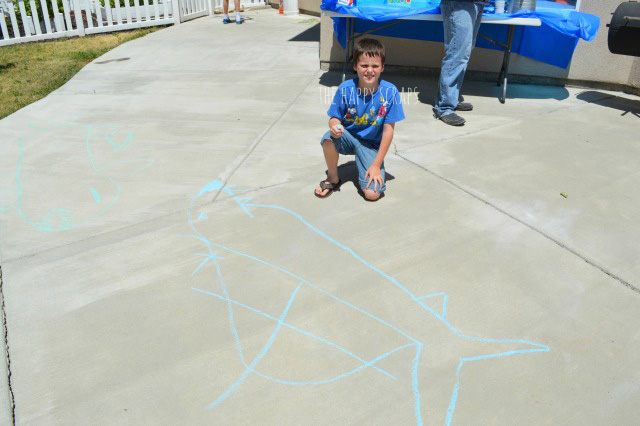 We created this ring toss type game. We had sharks in the water, and we painted large washers to look like life preservers. They had to toss the life preserver in and try and get it in the round white thing (PVC pipe cap). It turned out that this game was way harder than we thought it would be, so in the end, we were just trying to get the kids to sink the cap. 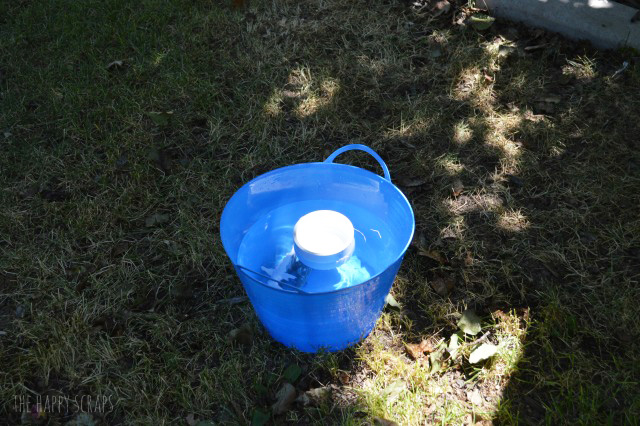 Here they are playing it. 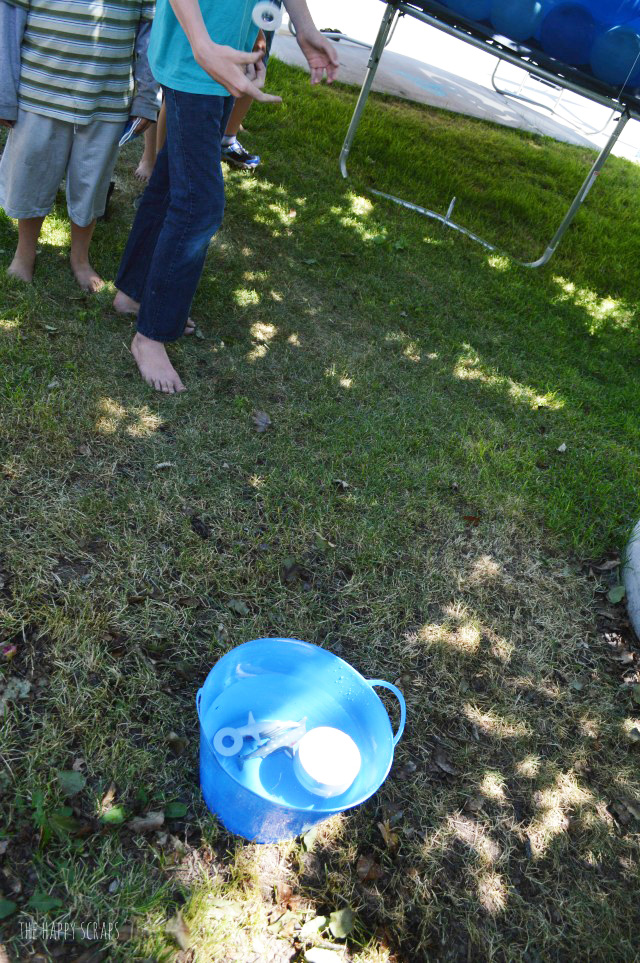 I cut out and painted this shark for a corn hole/bean bag toss game. I was going to paint the teeth on, but ran out of time so I cut some vinyl teeth and stuck them on. We built the base for it out of 2 x 4’s and attached the shark with a could of screws. We plan to make other attachments for the base to use for other parties. 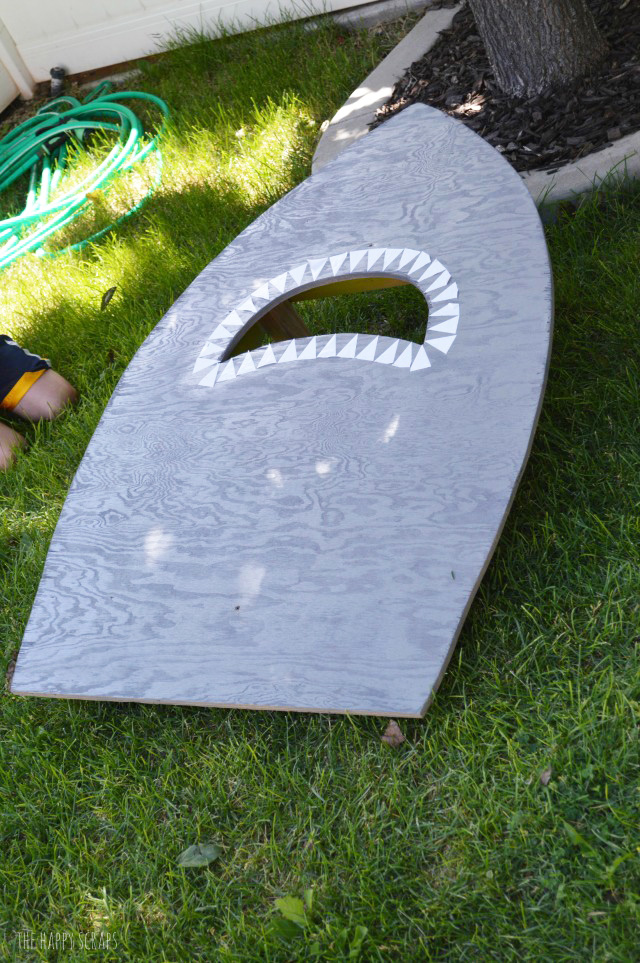 We played Pin the Fin on the Shark, and I think the kids had fun with it. I edited my shark image, to cut the top fin off, then I cut it all out of black vinyl using my Cricut Explore and then applied it to a foam core board. I cut the fins out using some black paper. 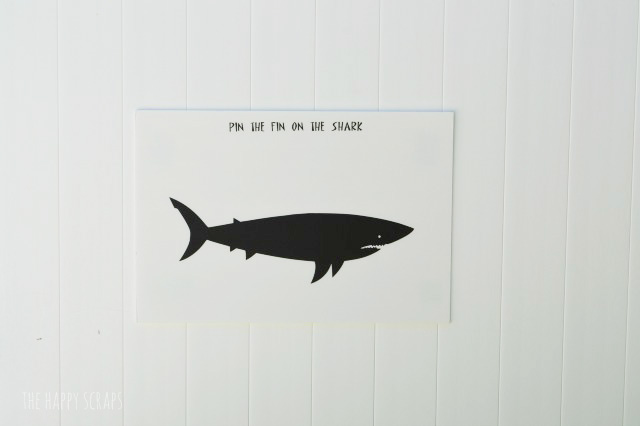 The hit of the party was the “Swim with a Shark” game. We got this wild idea that it would be fun to fill the trampoline up with balloons. We started looking into it, then we weren’t going to do it, and decided to go ahead with it last minute. So we filled about 600 balloons to put in the trampoline. The kids LOVED it! We had a blowup shark that my husband would hide in the balloons between each turn, and then the kids would have to find it. 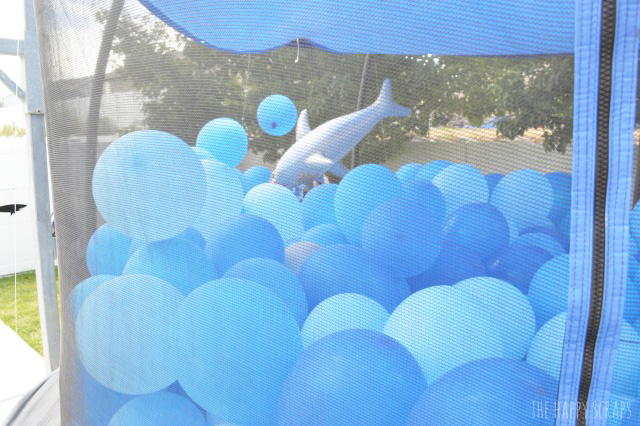 We called it the Shark Tank and told them that they got to swim with a shark! They thought it was awesome! 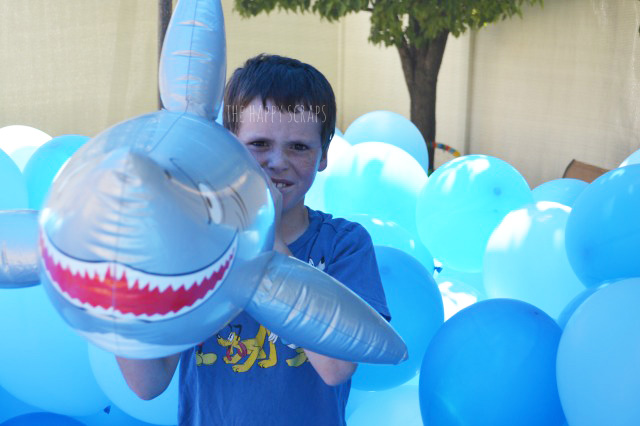 After all the games, we did cake and ice cream, opened presents, and then it was time to go home. Besides it being a really hot day, and me running like crazy to get all finished up to be ready for the party, the Shark Themed Birthday Party actually seemed to turn out alright, and the kids had fun!

The images and text on this site are copyright of The Happy Scraps. If you would like to feature a project or image on this site please email [email protected] Thank you! Please read the Privacy Policy and Disclosure here.
565 shares