Happy Tax day! Hopefully you are all getting a refund and don’t have to pay. I’m excited that we are getting a refund. I always look forward to this time of year for that reason. 😉 Anyway, just over a couple of weeks ago, I had the chance to throw a birthday party for the teachers and staff at our elementary school. I’m in the PTA and in charge of all the birthday gifts for the students and teachers, along with doing the birthday bulletin board each month. Well, the PTA presidents came up with the idea of throwing the teachers and staff a birthday party instead of buying a small gift for each of them, and it was SO fun! A little stressful, but so fun! I shared some pictures of the party and prep on Instagram, but today, I’m showing you the whole party. 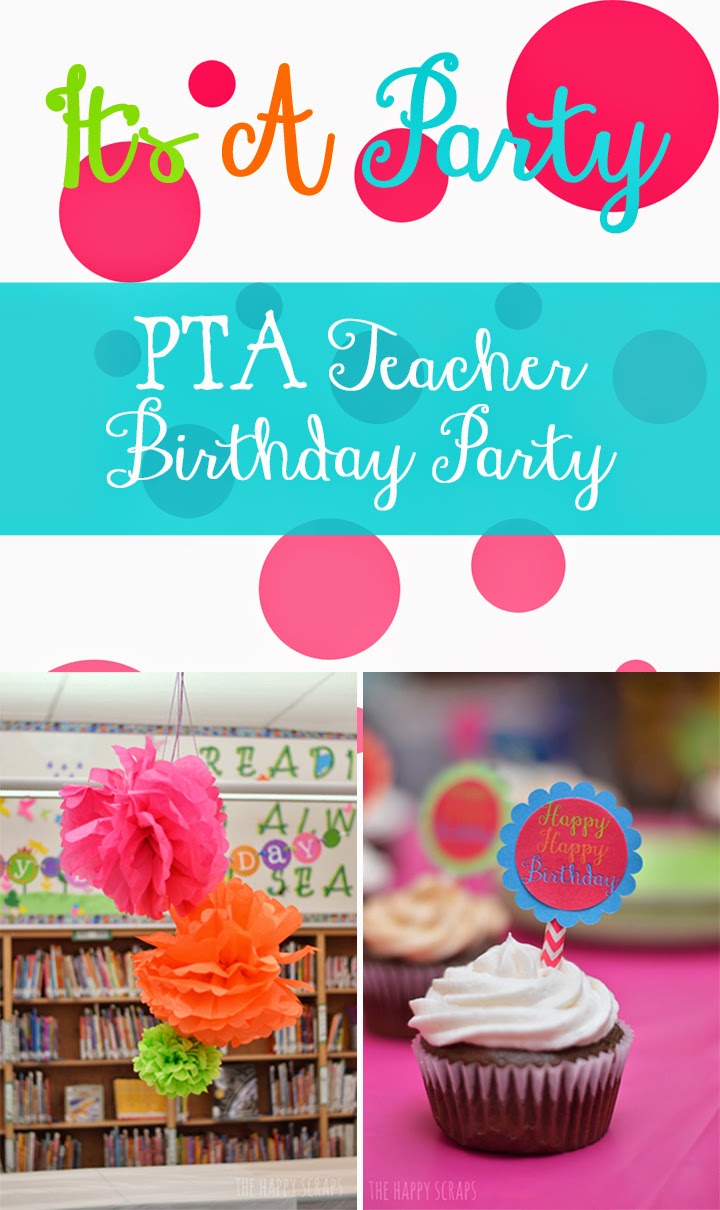 The first thing I did was create the invitations. We needed to get RSVP’s so we had a count of how many people would be there. We were having the luncheon catered, so we needed numbers. I created this fun invite and made it so they could tear the bottom off and return it with their RSVP. 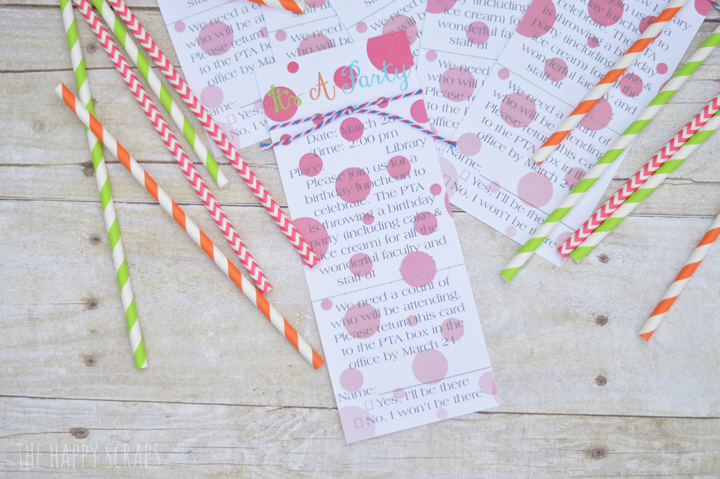 I knew the party was going to be held in the library, so when I started planning, I had to figure out what and how many of the decorations I needed. I asked on facebook for some ideas of inexpensive decorations, and someone suggested making tissue paper pom poms, because they would be a lot of decorations for not much money. We were on a tight budget for this party. 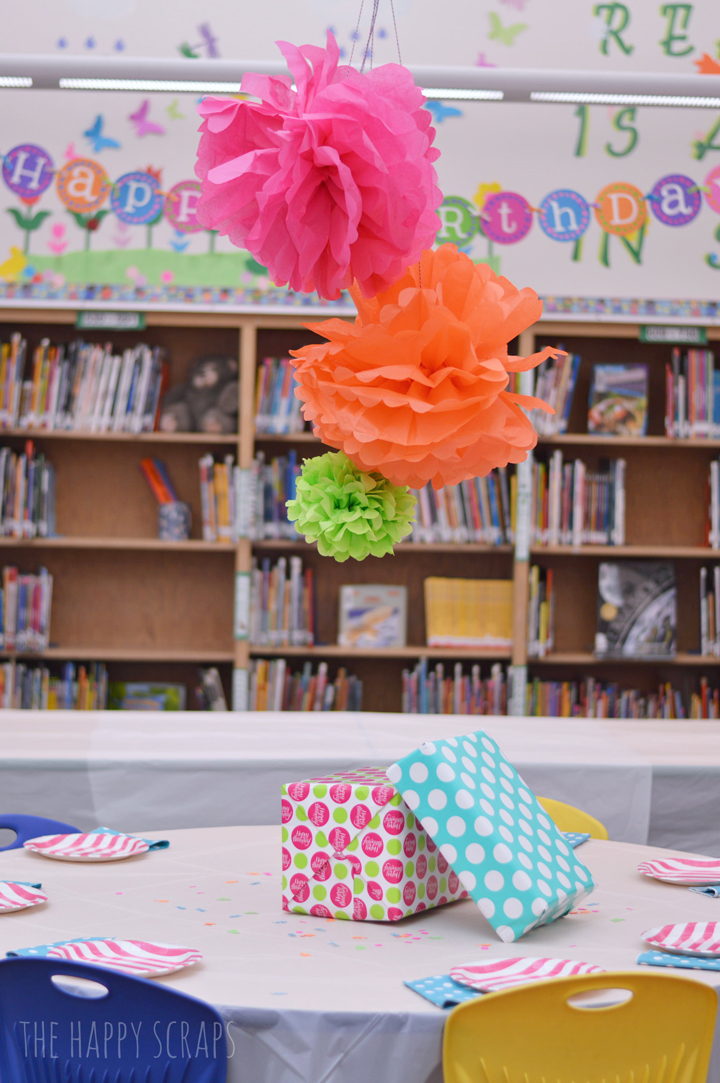 When we got there to set up, I was just glad that we ended up with enough decorations and we got the tables all to line up underneath where we could hang the decorations.

I spent some time (ok, a lot of time) making tissue paper pom poms. If you’ve ever made them, then you know how much time they take, and you also probably know how frustrating they can be. I had never made them before, but I did learn a few things while doing it. The small ones are much easier to make, and if I made the big ones again, I think I’d use at least 10 sheets of tissue paper. I only used 8, and I don’t think it would have hurt them to be a little more full. 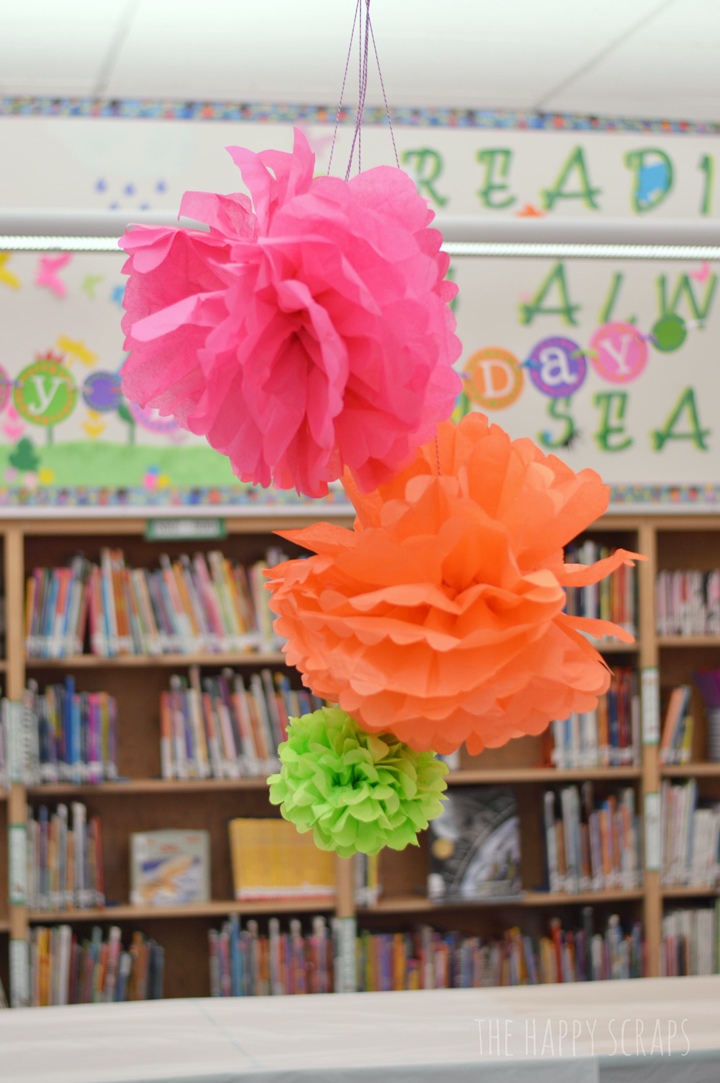 As I was making the pom poms, I kept saying that I would never do it again, but I think I would. They turned out to be a really great party decoration. 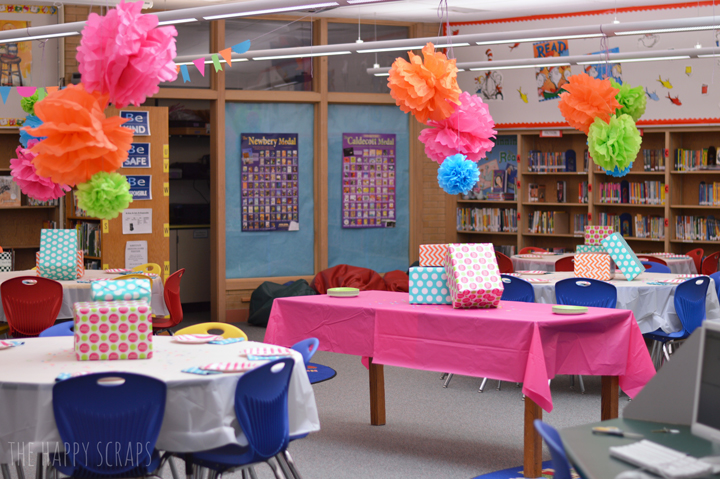 For the decorations on the tables, I cut out a bunch of confetti using my Cricut Explore. I could not believe that it could cut that small! It totally amazed me. I cut out confetti with the name of our school, but I blurred it out for safety reasons. I also cut out Happy Birthday, balloons, and cake into confetti. It was so fun! 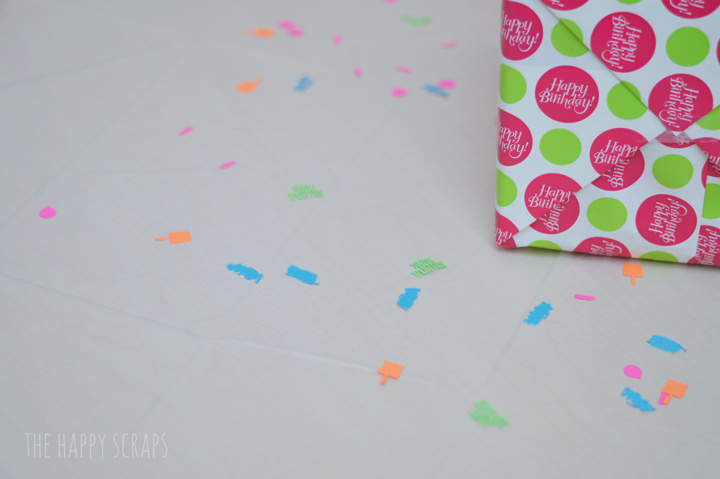 I was stumped with what to do for the center pieces. I was originally thinking that I could just use the pom poms above the tables and not have centerpieces, but when I started thinking about it, I knew that I needed something more, but I didn’t know what to do. One day when I was at the school, I asked my friend that works in the office if she had any ideas, and she suggested wrapping empty boxes. So I rounded some up and I found some wrapping paper that matched the colors I was using and wrapped the boxes. It was so simple, but worked great! 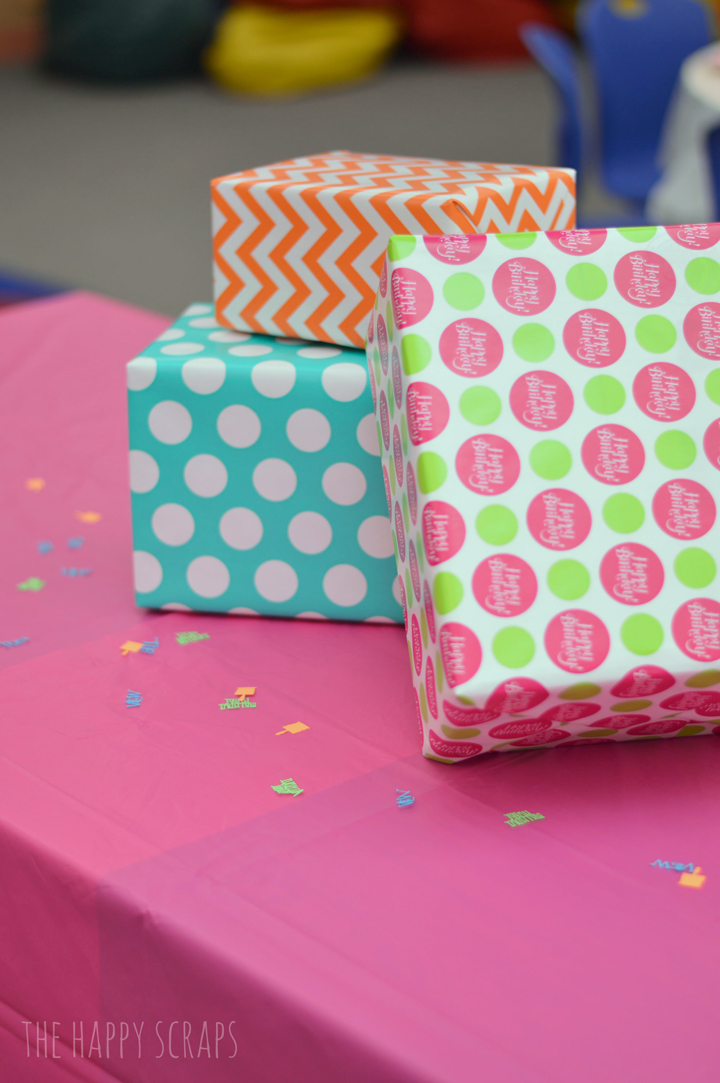 I found some fun plates at Zurcher’s, along with napkins that went perfect with the colors and theme of the party. 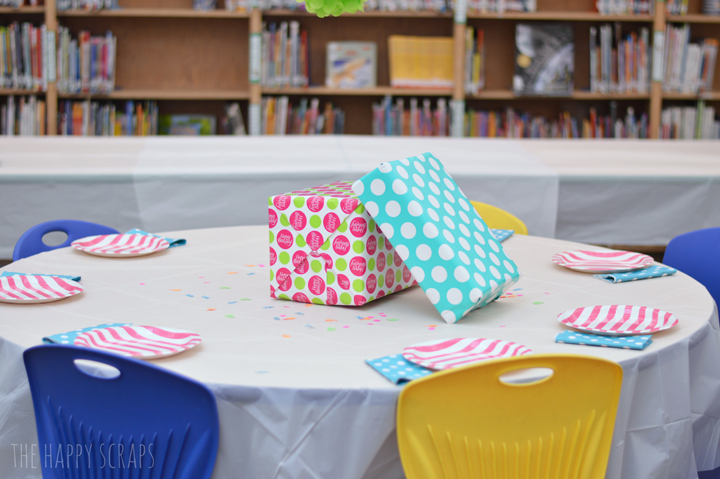 We had Sassy Sweets Bakery make the cupcakes, and oh.my.goodness! They were SOO yummy! I’m not a huge cake eater, I usually don’t have any at parties, but I had one of these cupcakes, and it was delish! 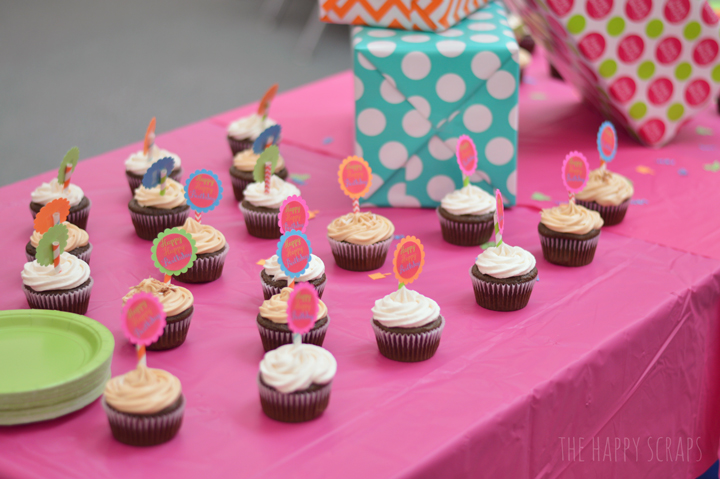 I designed the cupcake toppers, but my friend at the school put them together. If you’d like to download the center part, you can find it here. She used a punch to cut them out. I cut the scalloped circles on the Cricut Explore as well. I cut paper straws into thirds to make the sticks for the toppers. They turned out great! 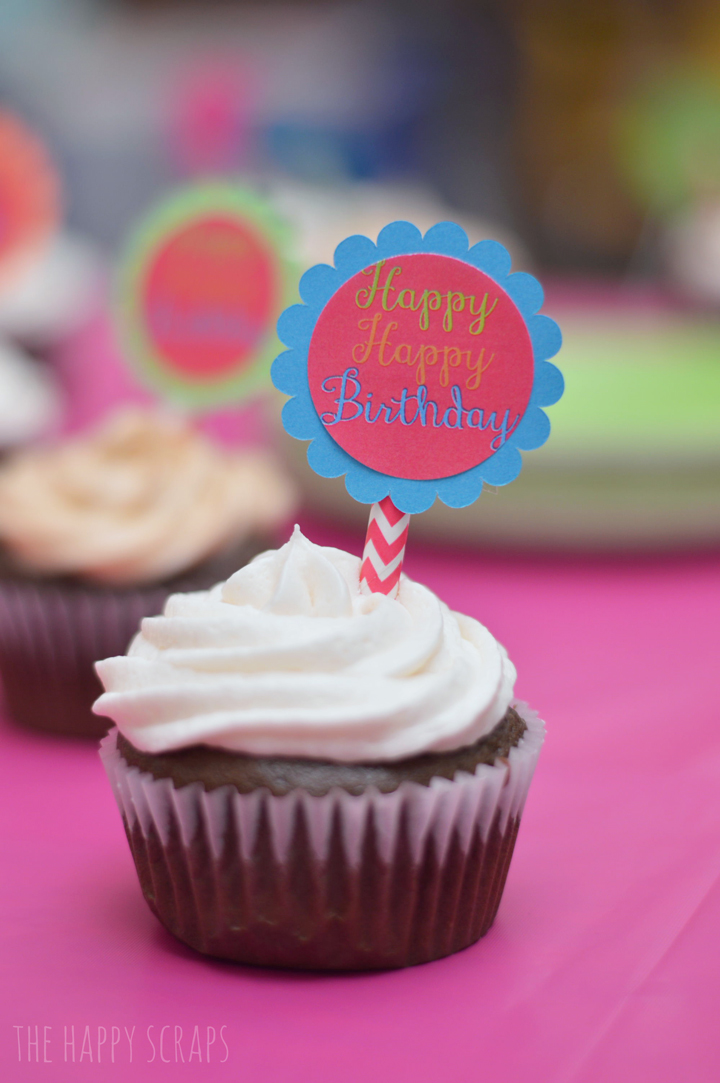 The night before the party, I was worried that I wouldn’t have enough decorations. I had some paper left over from when I cut the confetti and scalloped circles, so I decided to cut some banner shapes and grabbed some baker’s twine and I strung these banners together. They were so fast and easy to make. 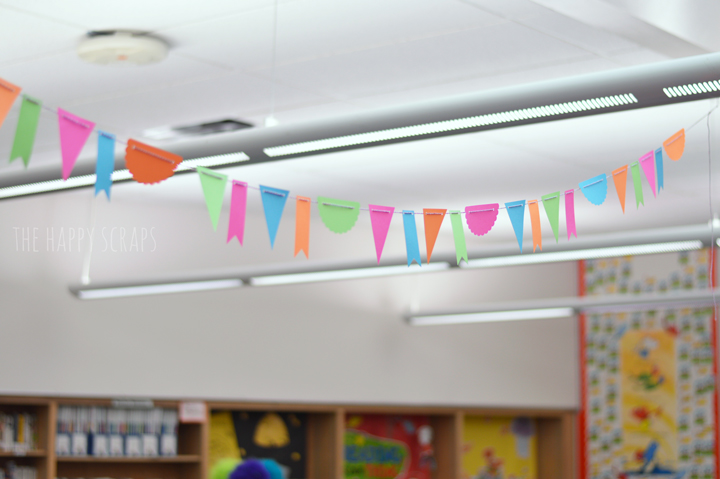 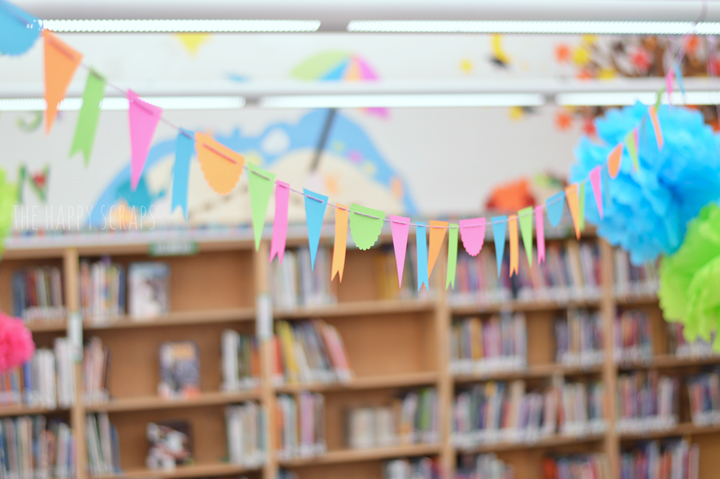 I love this Happy Birthday banner. I’m not sure if I’ve ever shared it here or not. It is one that I made a few years ago, for my mother-in-laws surprise birthday party. I worked out great to use, because it matched perfectly.

Well, that’s the party! I know this is a long post, but I didn’t want to break it up. If you have any questions about anything in this post, something that I might have missed, just let me know. I’d be happy to answer them. Have you ever been in charge of throwing a big party?